‘Once we get there, we need to walk together and at pace,’ a friend informs me, as our taxi driver zigzags at high speed along the highway. My heart beats a little faster; I am unsure what to expect.

After a 45-minute drive to the depths of southern Mexico City, we are unceremoniously dumped on a dusty street corner in a neighbourhood that few venture to without a clear purpose. We keep our heads down and stride towards our destination – an experiment in collective action, autonomy and self-determination.

There are only two entrances to get in or out of the settlement. One is a tall, grey-tiled wall emblazoned with the letters OPFVII (Francisco Villa Popular Independent Leftist Organisation, in English) and a protruding, three-dimensional red star. The two gates are manned at all times and no one comes in without approval. The police are entirely barred from entering.

The roots of this project date back to the late ‘80s, when, in an attempt to combat housing prices that were unaffordable for millions of Mexico City’s poorest, ‘Los Panchos’ (so called for the Mexican revolutionary figure from which the community takes its name) decided to take back a piece of land. What started out as a mix of cardboard and wooden structures has since burgeoned into its own clearly-defined neighbourhood, with almost 600 families living in the tranquil, tree-lined streets.

The friends I am with are regulars here, so we are cordially greeted by many people we walk past. The paved roads are neat and tidy, as are the two-storey homes that line the streets. The houses are clearly demarcated into sections, and each house within it is painted the same colour: yellow, green, orange, purple or blue. 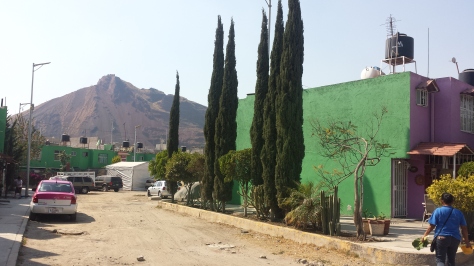 A coordinator, who has lived in the settlement for the past decade, explains that residents pay 15 percent of their income towards their home. This means that whether you are a doctor or a street vendor, you spend the same proportion of income on housing.

He says the project is about more than housing though. He describes it as creating an alternative way to live and to organise. He is clear that many different viewpoints are welcome, including the practice of different religions, but it is a desire to transform the world that unites them.

At present, residents still need to leave the community in order to make money and go to school. They hope to eventually be able to provide more in terms of education and employment. One long-term resident explains there was concern about young people having enough to keep them occupied and happy. They found out that many youth want a skateboarding park, so work is currently underway to build one.

Los Panchos employ a collective governance structure. Many decisions are made via assemblies, but there are also seven commissions that focus on specific areas, such as security, health, communications, etc. Beyond that there are other duties that residents take on, such as once a month everyone turns out to clean the streets. Anyone who doesn’t can expect a call from the social engagement committee, to see if they are okay.

The community has recently built cavernous greenhouses, in order to further their agricultural capabilities. They grow everything from robust leafy greens to delicate chamomile daisies. They have set up an irrigation system that helps combat the pervasive dryness that sets in at this time of year. This is just one of many projects the community undertakes to increase their self-sufficiency – they are also working on building a new medical centre, although they already have a small clinic in use.

Late in the afternoon, after we finish our grand tour of the site, one of the residents who has been here since the beginning invites us into her home to help cook a meal. As we juice a large pile of freshly-picked limes, she deftly chops locally-grown green chard and cooks it with onion and eggs into a frittata-like meal. We pack up the food along with plates and cups and head back to the greenhouses, to picnic with other women who have been tending the garden.

We set up a make-shift table by placing thin planks of wood across newly-mulched beds of soil. I would like to say that a hard day’s work made the food even more delicious, but any elbow grease expended on this day was not mine. I have merely observed, yet despite this I was warmly welcomed by everyone I met.

After the last scrap of food has been sopped up by fresh tortillas, and we have said our goodbyes, we step back onto the grimy streets of the surrounding neighbourhood. The thick dust blown up by each passing car, alongside piles of trash and scrawling graffiti, stands in stark contrast to where we have just come from.

We walk past half a dozen heavily-tattooed young men standing around talking loudly and laughing. One of them, who looks in his teens, has red eyes and is unsteady on his feet. By contrast, inside the walls of the Los Panchos community, drugs are prohibited and alcohol is restricted. Anyone caught abusing substances will be asked to leave. Similarly, other forms of violence and anti-social behaviour are not tolerated.

Homeward bound, bumping along in a small van in which I have to slump down so as to avoid hitting my head on the roof, I reflect that Los Panchos really are constructing a new world, day by day. While they don’t yet have all the answers, they are trying to eliminate obstacles wherever they can. At the same time, they aim to create a safe, inclusive space that provides thousands of residents with a standard of living anyone could be proud of. 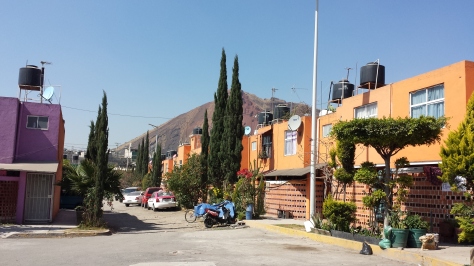