This article was written by Jen Wilton and originally published by Contributoria.

“We have been searching for our children, but we cannot find them,” Bernabé Abraján Gaspar said in Geneva at a special session of the United Nations in early February. His son Adán was one of 43 Ayotzinapa students who were forcibly disappeared in Guerrero, Mexico in September 2014. “We demand of our government that they help us.”

Enforced disappearances involve clandestine detention or abduction by agents of the state, or people working with state support, placing victims outside the protection of the law. More than 20,000 Mexicans have become the victims of enforced disappearance since 2006, when the government launched the ill-fated war on drugs in conjunction with the US.

The 8th session of the Committee on Enforced Disappearances was held at Palais Wilson, a 19th-century building that dominates Lake Geneva’s western waterfront and currently serves as headquarters for the UN High Commissioner for Human Rights. The committee met to look specifically at the alarming number of enforced disappearances in Mexico.

On the first morning of the two-day hearing, thickening snow pelted down as attendees cleared security at the front gate and made their way into the imposing edifice. While I was waiting to get clearance, a small group entered the tight guards’ office speaking Spanish. I quickly deduced this was the Mexican civil society group. Nobody needed to tell me who the victims’ family members were – their pain and suffering were evident at first glance.

Once the sizeable crowd had settled inside, committee chairperson Emmanuel Decaux initiated the morning session with a minute of silence. Delegates solemnly stood in remembrance of victims of enforced disappearances across the globe. 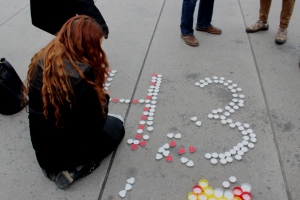 The non-governmental group from Mexico consisted of human rights organisations and parents whose children have gone missing in recent years. Hilda Legideño Vargas and Bernabé Abraján Gaspar travelled from Guerrero, where their two sons were abducted along with 41 other Ayotzinapa classmates by local police. The government alleges the students were subsequently killed by members of a notorious drug cartel. Both parents reject the official version of events and continue to search with other families for the 43 youth, holding out hope against the odds. They both say local and federal authorities have done little to help.

“We hope the UN will call on the Mexican government to tell us the truth, and to return our children to us,” Legideño Vargas said in an interview. “It is the only thing we want – that they return our sons.”

Daniel Joloy, a senior policy officer with Amnesty International, says Mexico is currently facing a grave human rights crisis and that all too often victims are ignored. “The victims are not taken into account and the right for full reparation never takes place in Mexico,” Joloy asserts. “There is no truth and justice for the victims and particularly in the context of enforced disappearances, there is no protocol to find the people who have been disappeared.”

“We accompany family members to the sites, they do not go alone,” Eliana García Laguna of the Mexican Attorney General’s Office told the committee. “They may have begun the work alone, but they are now accompanied by authorities. We have a search plan that we have designed, which involves seeking both remains in mass gravesites and living victims.”

During an extended lunch break, media representatives descended on the parents of the missing Ayotzinapa students. Their plight has made headlines around the world, thrusting them into the international spotlight. It is difficult to imagine how it would be to have to retell the story over and over. Legideño Vargas and Abraján Gaspar both demonstrated incredible strength and determination during the course of the committee hearings.

The next morning, as delegates filed back into the room, the Mexican ambassador carefully circled the room, shaking as many hands as possible in the civil society delegation. At times, Abraján Gaspar sat pensively with hands clasped in front of his face, as the Mexican government was grilled over how they respond to disappearances and what they can do to improve the worrying situation. There were audible groans from the NGO section of the audience when the Mexican government supplied incorrect information to the committee.

“I am searching for my daughter Alejandra, who disappeared in 2009 in the state of Chihuahua,” Olaya Dozal explained in an interview. Her daughter was just 16 at the time of her disappearance. Dozal lives in Cuauhtémoc, a city that has experienced alarmingly high rates of disappearances in recent years.

As I gently placed a kiss on Dozal’s cheek to say goodbye, her eyes welled up as she confirmed how difficult it had been to make the trip to Geneva. The strength of the victims’ family members shone through at all stages of the proceedings. I was humbled and yet also grateful for the brief conversations I had with the victims’ parents. Although nothing can change what has happened, perhaps in some small way our support can help ease the immense burden they carry.

I sat in the cafeteria and talked to Mexican students who had travelled from France to attend the UN session. They kindly shared baguettes and cheese that had made the journey with them. They maintain Ayotzinapa is a perfect example of what happens to people who criticise the government. “Normally, citizens should be protected by the state, not scared of [it],” one of the students lamented.

As the proceedings on Mexico drew to a close, a dedicated group from the civil society contingent braved sub-zero temperatures to gather in the Plaza of Nations in front of the UN’s main complex in Geneva. A 12m-high chair, which symbolises the fight against landmines, dominates one side of the square. Protesters gathered beside the towering structure and lit candles, hoisted banners and took part in sporadic call-and-response slogans – “You took them alive”, “We want them alive”.

Parents of the missing youths spoke over the crackly sound system, reiterating their demands for justice and highlighting the Mexican government’s inaction in the face of a crisis of epidemic proportions. Ruth Fierro Pineda, from the Centro de Derechos Humanos de Las Mujeres in the northern Mexican state of Chihuahua, told me the international community can help by questioning the Mexican government and by continuing to apply pressure.

A young Mexican student in a black beret took the microphone, easily switching between Spanish and French to translate his message for the people in the square. He voiced what no doubt many of those gathered were thinking – he offered his unconditional support for the victims’ families, saying, “We are all connected in this struggle.”

“Thank you for the help,” Abraján Gaspar told the crowd gathered in front of the UN headquarters. “We will continue the fight and we hope that you will continue to help us.”