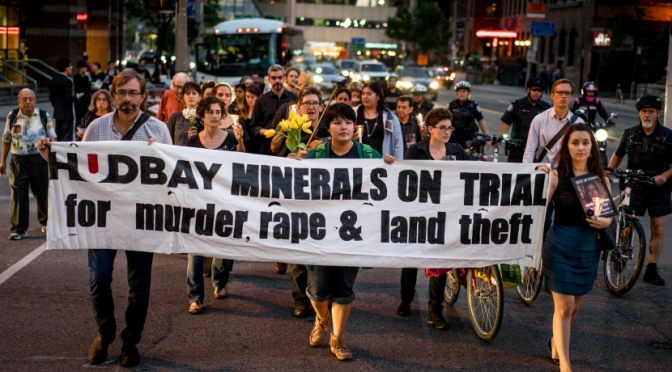 Written by Jen Wilton
Originally published by Canadian Dimension in the Mar/Apr 2014 issue, reposted with permission

In January 2007, police and military personnel descended on the remote Mayan village Lote Ocho in the El Estor municipality of eastern Guatemala. The armed men forcefully expelled community members from land that had been leased to nickel-mining company Compañía Guatemalteca de Níquel (CGN), burning houses to the ground. Eleven indigenous women say they were gang-raped by the evictors and allege mine security staff were involved.

Then in September 2009, Adolfo Ich Chamán, a community leader and outspoken critic of the mine, was allegedly hacked with a machete, then fatally shot by the mine’s head of security Mynor Padilla. On the same day, German Chub, a single father with a young child, was also allegedly shot at close range by Padilla, leaving Chub paralyzed. Padilla was later arrested in Guatemala for the murder of Ich.

These events form the basis of a trio of lawsuits brought against Canadian mining company Hudbay Minerals. Hudbay owned Guatemalan company CGN from 2008 to 2011, following a merger with CGN’s former owner Skye Resources. In 2012, Ich’s widow Angelica Choc, Chub and the eleven women from Lote Ocho filed lawsuits against Hudbay in Canada, citing widespread corruption and impunity in Guatemala.

“With seemingly unconditional backing from the Canadian government and its diplomatic service, Canadian mining companies have been widely implicated in human rights abuses throughout Latin America,” says Jennifer Moore, Latin America Program Coordinator for MiningWatch Canada, reminding us that these are far from isolated events. However, a Canadian mining company has never before stood trial on home soil for actions committed abroad.

“There are no international legal rules that directly bind corporations to respect human rights,” says Penelope Simons, an associate professor of law at the University of Ottawa. Simons was given leave by an Ontario court to represent Amnesty International in Hudbay preliminary hearings. “There is no clear obligation on Canada and other home states to regulate their corporations when they are operating trans-nationally.”

The Hudbay lawsuits had to pass two legal hurdles before being cleared to proceed to trial in Canada. Cory Wanless, a lawyer for the plaintiffs with Toronto law firm Klippensteins, explains, “There is no question that Canadian courts can, if they want to, hear claims against Canadian mining companies for abuses committed abroad.” Instead, he says, one of the barriers is forum non conveniens, which means that when two jurisdictions could hear a case, the Canadian court has to decide which one is more appropriate.

A few weeks before the scheduled hearing on this issue, Hudbay dropped their argument, Wanless says, “essentially acknowledging that it could properly be heard in Canada and we think they did that because we had compiled some pretty compelling evidence that there would be no reasonable prospect of a fair trial in Guatemala.”

The second legal issue is that according to Canadian corporate law, parent companies cannot be held responsible for the actions of their subsidiaries. “Basically all mining companies organize themselves through layers of subsidiaries, which they do for tax reasons and also to avoid liability,” says Wanless. “Hudbay was arguing that the parent company should never be responsible, no matter how involved they were in the particular decisions that led to the harm.” However, Wanless counters that it was Hudbay executives in Canada who set company policies regarding mine security and community relations in Guatemala, making them responsible for the actions of local security staff. In July 2013, an Ontario court ruled that Hudbay could potentially be liable for the actions of its subsidiary, clearing the way for a trial in Canada.

The future of Canadian mining abroad

In total, $78 million in damages are being sought from Hudbay, equal to one-tenth of the company’s 2012 revenue. However, opinions are divided over whether the wider mining industry in Canada should be worried.

Tracy Pratt, one of Hudbay’s lawyers from law firm Fasken Martineau, says it is too early to tell what the upcoming trial will mean. “The cases are at a very preliminary stage, and so it is entirely speculative to talk about wider implications for the mining industry or companies with foreign operations generally,” she says. “The forum [non conveniens] issue was not judicially determined and therefore is an open question for individual future cases.”

Paul Champ, a Canadian human rights lawyer, also represented Amnesty International in the Hudbay preliminary hearings. “This case is significant as it establishes that companies can be held accountable in their own courts for human rights abuses committed abroad,” Champ says. “Efforts to bring similar cases in Canadian courts have been unsuccessful in the past, so the Hudbay litigation is precedent-setting.”

Some major law firms are seemingly in agreement and have started to warn clients of the possible implications of the Hudbay trial. Baker and Mackenzie, the second largest law firm in the world, said in a notice to clients, “If the plaintiffs are ultimately successful on the merits of their claims, this case may lead to increased exposure and liabilities for Canadian companies working abroad.”

Next steps in the trial

The plaintiffs have opted for a trial by jury, meaning ordinary Canadians will decide the fate of these cases.  “It is our belief that Canadians would never allow corporations to get away with these kinds of abuses in Canada, and will not tolerate such abuses when committed by Canadian corporations abroad,” the plaintiffs’ lawyer Murray Klippenstein said in a statement. The trial has entered the discovery phase, which is expected to last from one to two years, during which time the company will need to disclose documents related to the running of its former Guatemalan mine and Hubday executives will be questioned under oath.

Grahame Russell, director of Rights Action Canada, has visited the plaintiffs’ communities in Guatemala regularly over the past decade. He says that while the lawsuits proceeding to trial offers the communities a sense of empowerment, it changes little in the short-term. “They are living in very precarious conditions and the threat of mining-related human rights violations and environmental harm is looming as much today as it was five years ago,” he says. Russell says Canadians still need to apply pressure in other areas, such as policy and legal reform, and that Canadians may be supporting companies linked to conflict through their investments in pension plans.

“Everyone has an interest in ensuring that corporations respect human rights, wherever they may operate and whatever ownership structures they may put in place,” says lawyer Champ. “The Hudbay case stands for the principle that companies can’t simply pack up and escape responsibility by returning to their home country.”

Jen Wilton is a freelance journalist and researcher who writes regularly about global mining and human rights issues. She tweets as @guerillagrrl.