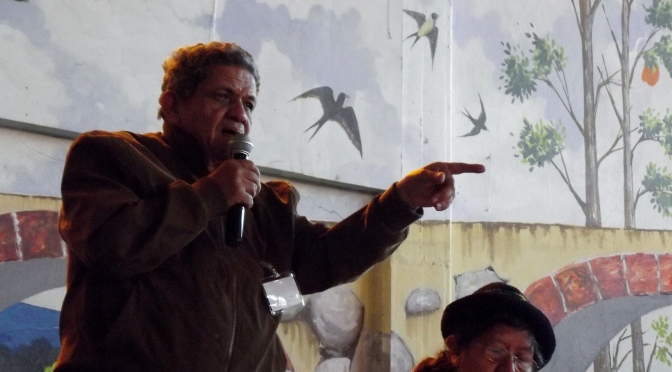 From January 17-20, anti-mining activists from Mesoamerica and beyond gathered in the small Mexican mountain town of Capulálpam de Méndez, Oaxaca to say ‘Yes to life! No to mining!’. The event attracted nearly 500 participants from Mexico, Guatemala, El Salvador, Honduras, Puerto Rico, Argentina, Canada, the United States and Europe.

People gathered to share stories about how mining practices have impacted on their communities, on the environment and also to share strategies of resistance. A strong theme throughout the event was the centrality in not just fighting against individual mines, but in securing autonomy for communities affected by mining to make their own choices. When communities themselves are able to determine their own paths, mining and other destructive industrial practices cannot unilaterally affect peoples’ health, human rights, and local environment. As participant Carmelina Santiago from Oaxaca, Mexico stated emphatically, “The greatest authority in the community is the community!”

Dr. Juan Almendares, a Honduran doctor with a long history of human rights and anti-mining activism, was a speaker at the event. Almendares, founder of the Honduran Science Academy,helped track health problems associated with Canadian mining company Goldcorp’s San Martín mine in the Siria Valley. He has also received many threats against him due to the nature of his work. In a 2010 interview he stated, “I was condemned to death by the death squads in the 1980s…for four years I couldn’t practice medicine because I was prohibited by military. So I began to link with communities.”

Almendares spoke with Upside Down World about the negative social, environmental, and health impacts the mining  industry has caused for communities in Honduras.

“How is it possible to have cyanide lakes in a country with hurricanes?”

Almendares pointed out that the unpredictable weather in Honduras makes the impacts of the mining industry even more serious, as he thoughtfully asked, “you remember hurricane Mitch?” From 1991 to 2010 Honduras ranked among the top three countries in the world in terms of the loss and devastation associated with extreme weather events.

Mining operations leave tailing ponds full of toxic materials like cyanide, mercury and arsenic, which not only seep into the surrounding environment but can also become wind-borne in adverse weather conditions. Almendares also stated that heavy rains around underground mines near inhabited areas can cause “the destruction of the city,” as the foundations of whole towns may become unstable due to underground erosion.

Almendares lamented the long history of heavy metal contamination by mining operations in Honduras. As there is little control or supervision of the industry, water sources have become tainted by lead and mercury.  He went on to say, “We have arsenic and other heavy metals which have damaged the communities, particularly children, and you know the people who are undernourished are more susceptible to the damage of heavy metals…Cancer is growing, probably due to pesticides, heavy metals and also polychloride biphenyl. These toxins that they use in the electrical transformers, in the old-fashioned systems, we still have them.” To put this in perspective, polychloride biphenyl – or PCB – has been banned in the United States since 1979 due to its cancer causing properties.

There is also a problem in Honduras with acid drainage, where acidic water either leaks from old mining sites or from tailings ponds. “Acid drainage is a very strong phenomenon that lasts almost forever. The contamination lasts for more than 50 years, maybe 100,” warned Almendares.

“All of these things have done a lot of damage to the health of the people.”

Almendares described some of the mechanisms through which mining has impacted the health and well-being of communities. One of the main issues is around the contamination of water supplies; however, the amount of water that the mining companies take from communities has also made sanitation more difficult and lead to water scarcity. In many instances, mining operations have “destroyed the underground aquifers.”

The water contamination has lead to an increase in the prevalence of skin conditions, so that people often suffer from rashes and skin irritation. People also end up with higher rates of infection due to not having adequate water in which to bathe. The environmental degradation is further compounded by poverty – “because they are also poor, undernourished, the immune system is more susceptible to fungus, to bacteria and other problems with the skin.” Futhermore, eye conditions, such as conjunctivitis and corneal ulcers, have also been recorded in communities impacted by mining.

In addition to skin and eye problems, there are also higher rates of respiratory disease and cancer that have been documented. Almendares explained that the dust generated through the use of explosives in mining sites has lead to higher rates of respiratory problems, such as “an increase in asthma, increase of bronchitis, or increase of pulmonary disease.” He went on to note that, “because some of these toxins are carcinogenic, or co-carcinogenic, they induce cancer. Then you may have cancer in different organs.”

The toxic effects of the materials used in mining can also have harmful repercussions for the development of children. The toxins can “impact in the growing tissues…so they cause damage to the brain system, to brain development and they may also cause deformities during pregnancy.” Any health problems associated with mining are exacerbated by the lack of an adequate health care system in Honduras.

“There is no protection of the community and most of the people who are affected are women because they use water…they wash the clothes, they cook and they carry water. Most of the health problems we have found have been dermatological problems, eye problems, respiratory disease, miscarriages in cows and women, and also we are getting more problems in itching. We have problems with the nervous system, depression and also the impact of deforestation and the dust,” he added.

In 2011, Almendares wrote about the cover up by the Honduran government of a scientific report that revealed the adverse health effects of Goldcorp’s San Martin mine in the Siria Valley of Honduras. The report, which was suppressed for four years, showed that residents near the mine had elevated levels of lead in their blood and displayed symptoms of chronic arsenic and lead poisoning.Photographic evidence has also shown the detrimental effects of the pollution from the mine, which has devastated both adults and children.

“These companies promise many things, but they don’t achieve what they promise.”

Almendares spoke out about the poor conduct of the mining companies, in terms of their lack of accountability and also the tactics they use to infiltrate communities. “There is no control by the government and there is also corruption. Not only of the government – they corrupt mayors and authorities at the municipal level,” he said.

This was a familiar theme throughout the 4-day anti-mining conference in Mexico. Activists from Mexico, Guatemala and El Salvador also had stories of how mining companies in their regions have undermined local democracy to influence decisions in favour of unmitigated extraction and exploration, against the wishes of the communities affected.

Further north, John Cutfeet, from the KI First Nation in Canada, described the ways that democratic processes were undermined in Canada to enable deeply risky business practices to go unchallenged. “We face similar experiences and similar tactics by companies and governments in order to try and access lands and rob of us our birth rites to those lands,” said Cutfeet.

Almendares compared the damage from mining in Honduras to the situation in Mexico.

“I will say that they are similar situations. The difference is the dimension of the damage, because we have been extremely damaged in Honduras by the mining companies for a long time,” said Almendares. He visited a large mine in Mexico and said that the mining process was more accelerated there than what he has seen in Honduras, noting that, “In Honduras we see these problems after five or six years, but in [Mexico] you see it before that.” He said there are a high number of premature births near the Mexican mining site, which is cause for concern.

“Mining is really a terrible system for the lives of the people,” Almendares concluded.

Jen Wilton and Liam Barrington-Bush currently live in Oaxaca, Mexico and report on social and political issues related to Mexico and Latin America more widely. Jen tweets as @guerillagrrl and blogs at Revolution is Eternal and Liam tweets as @hackofalltrades.