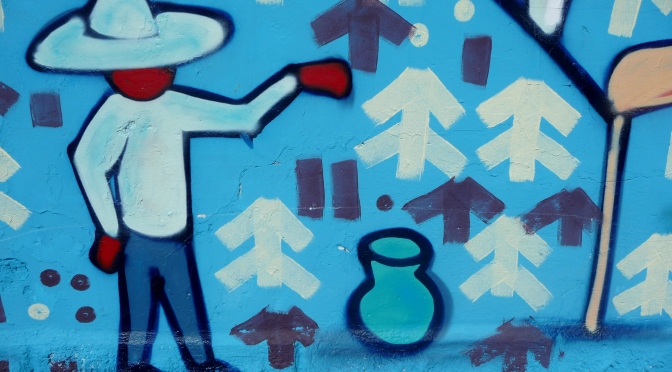 Today in Oaxaca City, Mexico a stunning new mural was unveiled to coincide with the Idle No More day of action that has been taking place across the globe. The mural is dedicated to ‘the people who organise to defend the common good’ and depicts elements of community life under threat in many indigenous communities: water, animals, crops and the communities themselves. 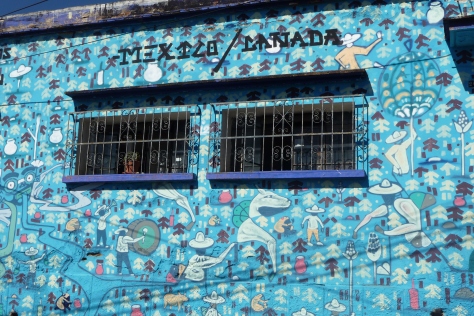 The accompanying press release stated that, “the people of  Mesoamerica fight against the transnational hegemonic process of destruction of our own social, economic, political, cultural and territorial structures.” The communities speak out and act “in defence of life, our sacred spaces, our forests, rivers, mountains, springs and our sons and daughters.”

Tlaloc, the Aztec god of water (pictured above), is featured prominently in the mural, with a stream of water flowing from the mouth. Tlaloc was the most important of the Aztec deities, as water was seen as the basis for all life.

The mural was commissioned to tie in with the anti-mining ‘Yes to life! No to mining!‘ gathering that took place in the mountain town of Capulálpam de Méndez from 17 to 20 January in the southern Mexican state of Oaxaca. Many indigenous communities throughout North America and Latin America face similar threats to their ways of life as a result of the extractive industries. Water is polluted, food sources contaminated and the social fabric of different communities has been torn apart by the divisive tactics of the mining companies.

John Cutfeet of the KI First Nation people in northern Ontario, Canada attended the event in Capulálpam to share his community’s experiences of kicking out two mining companies from their lands. John also spoke of his involvement in the Idle No More movement in Canada, including walking over 400km from Toronto to Parliament hill in Ottawa to highlight ongoing treaty violations by the Canadian government. John called on the anti-mining activists present in Oaxaca to join the day of solidarity actions for Idle No More on 28 January.

In the final declaration of the ‘Yes to life! No to mining!’ event, activists from Mexico, Guatemala, El Salvador, Honduras, Puerto Rico, Argentina and beyond banded together to pledge, “We declare our support for the Idle No More movement in the defence of their territories and sovereignty.”