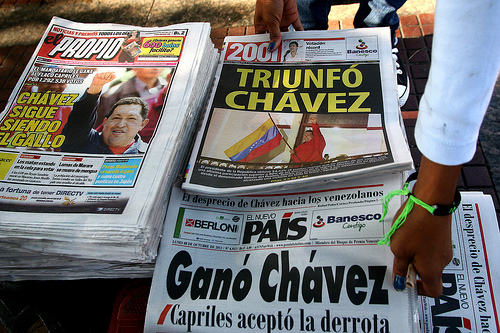 We all knew this day would come.  After almost 14 years as President of Venezuela, this week Hugo Chávez has finally broached the topic of a successor, due to the return of cancer he first announced in 2011.

The exact state of his health is unknown, but Chávez underwent a  “complex, difficult and delicate” surgery today in Cuba.  His unprecedented popularity has been built around a cult of personality, but can Chávismo survive without Chávez?

Back in October, Chávez was re-elected for his 4th consecutive term as president.  His popularity has been reaffirmed time and again during more than a decade in power, having won multiple elections and a recall referendum.  He has also withstood numerous attacks on his leadership, including a coup attempt in 2002.

Chávez remains popular due to his prioritisation of social welfare.  In a continent where left-wing governments have won ground in recent years (the so-called ‘pink tide’), Chávez has arguably made the strongest commitment to make changes in education, health services, housing and employment in order to give people living in poverty a higher standard of living.

The government under Chávez has made a clear break from serving the interests of the elite and they have set the wheels in motion for a vibrant civil society able to work with but also challenge the government.  As Ben Dangl notes in his book Dancing with Dynamite: Social Movements and States in Latin America, the government of Venezuela has, “empowered the grassroots in unprecedented ways, and created space in which social movements can flex their muscles.”

They have done this, in part, by funding community-based initiatives such as radio stations, health centres, comedores libres (free cafeterias), schools and workers cooperatives.  While the government has provided part-funding for many such projects, communities play an integral role in identifying priorities and managing projects once in place.  Community groups no longer fear repression or reprisal from the government, but have been given responsibility to manage their lives collectively.

Outside of Venezuela, Chávez is the face of the Bolivarian Revolution, but the reality inside the country is that thousands of communities are actively working to better their  standard of living.  Many government policies rely on the organisation and participation of communities, but as one Venezuelan community activist states in Dangl’s book:

“We support and defend the Chávez government, but we are very critical when we need to be.  If there are no criticisms, the revolution dies.  Socialism fails when people stop having a voice in the government. I don’t believe in saviours, I believe in the people.” (p.94)

The Chávez government is far from perfect and has been criticised by Human Rights Watch for removing checks and balances on their power, restricting media freedom and silencing their opponents.  These measures are undoubtedly aimed at weakening the control of the old guard, but the opposition is still a formidable force.

For many in Venezuela, support for Chávez exists outside of party politics.  This does leave the Bolivarian revolution vulnerable if Chávez steps down.  If the opposition comes to power they may not look so favourably on the community councils, workers cooperatives and land committees that have been set up under Chávez.  While the Chávez government has worked to centralise and consolidate power, what will ultimately sustain the momentum of change is the work of institutions and movements outside of electoral politics.

In a surprise move Chávez called on his supporters to back vice-president Nicolás Maduro in case his health fails. Whether this endorsement will be enough to convince the people of Venezuela is unclear.

But as one Venezuelan activist said, it would be a mistake for the opposition to underestimate the situation by thinking “that Chávez is a person… Chávez is a movement, an idea, we are millions who are … prepared to struggle”.